This is part two. Get up to speed with part one here: Rescuing 4×4 VW LT From Lithuania!

Importing a second hand vehicle is hard enough but when you’re not even sure that the vehicle can drive further than a few yards it adds a certain je ne sais quoi!

David & I are importing 2 orange series 1 4×4 VW LT’s. In part one of this series we flew out to Lithuania to view them and paid our deposit. Here’s an as yet unpublished video exclusive of our exciting test drive!

When we returned we finalised very reasonable transportation logistics with a Lithuania haulier sourced on uship.com and now we were back across the channel to rendezvous and bring them on home!

David beat me to the docks and was there to swiftly usher me onto the shuttle bus to the ferry. We sat and ate and caught up with our excitement. Once we disembarked at Calais we jumped in a taxi towards the prearranged rendezvous point at Cite L’Europe. However on the last stretch of dual carriageway before the exit we spied to large orange brick shapes on the other side of the road… could it be our vans?! It was, and it turned out that the driver wasn’t allowed to park where we’d suggested. We instructed thee taxi driver to do a U turn at the next possible opportunity and pull off by the low loader.

The truck and it’s driver had been waiting for us a while. He was keen to off load, but unlike the taxi driver to whom David had been able to speak in French (David is French) we were unable to share a word! However it quickly became clear something was wrong! The first van started fine and was driven down off the trailer. The 2nd van clearly wasn’t going to start. We tried jumping it off the truck battery but despite turning over sluggishly it was apparent that we weren’t going anywhere. David feverishly fiddled under the hood. We even sprayed what we assumed to be a Lithuanian Easy-Start into the air intake. Nothing. We decided that we had to get the van off the back of the truck whatever and so pushed it off.

As the driver packed up I suggested we tried jumping off the 1st van. We sat for a while trying and trying. I decided to rev as hard as felt possible to try and pass as much current to the 2nd van as possible. Eventually, just as the driver needed his jump leads back, she jumped into life! Huzzah. Now we had to make sure we never switched off!

We bid the Lithuanian lorry driver farewell and he set back off the 1,200 miles to Lithuania. David and I were left on the side of the road. Our next problems became evident. Thankfully the 1st van – the one I was now in charge of – needed nothing more than wiper blades to make it drivable. I used a wet wipe to clean the windscreen. The 2nd van – David’s – was in need of a little more TLC. The biggest problem was the accelerator. Who knows how they’d managed to drive the van onto the truck as on first start up attempt the accelerator pretty much disappeared into the floor. Thankfully David’s resourceful pre-planning meant that he had some Sugru with him and a patch was created. We set off towards the nearest motor factor.

What a hairy first drive! We both managed it, but the unfamiliarity of the sound effects and wobbles were disconcerting. In fact so far beyond disconcerting it was laughable. We made it to the French equivalent of Halfords in Coquelles. Figuring we were in the best place to need another jump start we killed the engines. We shopped. One of the most ingenious mods was to be a bicycle break cable to manually control the accelerator via the front hatch in the engine cowl for David!

We rolled on to the port. We were checked in without problem and with no questions asked about the vehicles. The only comment was that it looked like we had quite a project on our hands! We went for dinner before our 5pm departures. We rolled onto the train. The journey was spent assessing the state of the vans. Poor is probably an understatement. Just as well we were after a project each!

Thankfully on the English side you simply roll onto the dual carriageway. It was now dark but we’d already fitted beam benders. For the first time we were able to stretch the van’s legs. Things seemed to be working. The noises grew and continued. The smell of hot and/or seized brakes stayed with us but we ploughed on through the night. We agreed that we shouldn’t stop, and so at the M25 we waved and parted company for our respective journeys home. I was amazed to find that towards the end of my trip to Brighton that I would reach 105kph (at 3800rpm)… 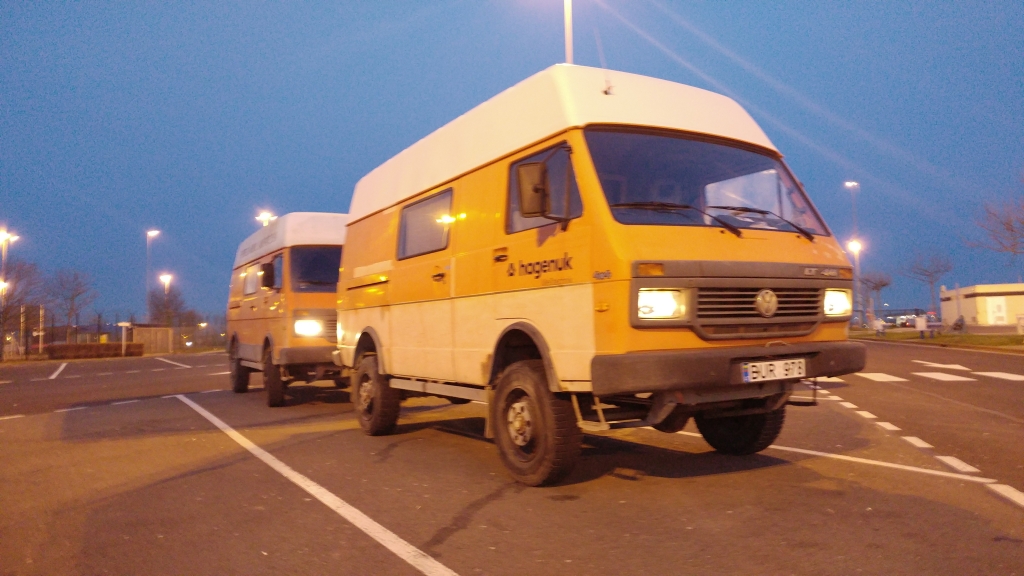