LT owners are a brave bunch – getting together in a field with hardly any facilities (read on for more!) in April is not everyone’s cup of tea, but nevertheless the mighty LT represented well with 10 mk 1’s attending our first gathering of 2015.

These vans are no ordinary camper. Most are custom builds, and of course all are based on VW’s first commercial vehicle the Lasten-Transporter (or cargo transporter). All in attendance were mk 1’s – the pre-facelift/Sprinter-merge version – and several were in different phases of conversion (a big part of ownership is always having new ideas to improve things!)

The venue for our get together this time round was a field owned by one of our members just outside Norwich, Norfolk, in the beautiful Tas valley. The field itself was just that, but we were greeted by a valet service kindly placing planks below our tyres to stop these heavy beasts from sinking in to the soft ground. Ed & Rupert had set the field up to include a large area for us all to sit round a roaring open campfire both nights, and had created a basic soil toilet and a gents urinal using a bit of old guttering! There was even a chemical toilet for the ladies in an old farm trailer with a lockable door. Luxury for those without on-board facilities. It was certainly one of the best views from a urinal I’ve had in a while!

They were joined this time round by Mark, who brought his D reg self-build, a van previous owned by Facebook VOLT group admin Dan Haines, and now proudly sporting a well-carpeted interior that could only be described as pub-like (!), with brass trinkets, candle holders and a wood burning stove. Next up were John & Ruth and their boys Elliot & Taylan in their 6 month old Westfalia Florida. Although John had done plenty of tinkering to get to know this great conversion he was glad to see Tim in his Florida and pick his brains about the van’s intricacies. And then there was Adam & Emma in their ’96 conversion – a late model TD sporting a custom interior and a very interesting moulded rear end with a central caravan door reminiscent of the movie 2001: A Space Odyssey… “open the pod bay doors Hal”!

The weekend weather was mixed, but the conversations about the passion for the vans continued all weekend, until the embers of the fire died down and the home made sloe gin got drunk! As with our previous meet there’s lots of interest in the specifics of the fettling that’s been done with the Mk 1 LT. It’s safe to say that there’s always been scant info about these legendary but overlooked VW’s so most of the learning is to be had by picking the brains if those with a history if LT addiction, or simply those with an inane passion for championing the LT cause!

As previously the meet up was organised between the LT group on the infamous Brick Yard website and the VOLT group on Facebook. Most owners are active on both but it’s safe to say that the best knowledge resource remains the Brick Yard and the best photo sharing and thigh rubbing goes on to VOLT. Several members were sporting the latter group’s T shirts! The gathering was a chance to merge the two – have a good oggle inside and around a each others vans and hear how things were done and chew over new ideas.

Tim & Russell are both thinking about larger wheels to make better use of the very low ratio 1st gear and get better cruising performance in 5th (Tim in conjunction with a lift kit that he is importing from Germany). Vic already has a larger tyre on the back of his LT which he says gives him another 2-3 mph top speed; Rupert is completing the fit out of his LT (from shagged wagon to shag wagon!), complete with remote control individually dimmable LED spots, inside, in the gull wing door, and underneath the van! He also has a very fanciable slide out kitchen stove unit under that gorgeous gull wing door; Mark had recently fitted a wood burning stove in his LT – a second attempt after a previous (manufactured) stove filled the van with smoke. This new one is so effective he has to sleep with a window open (it melted the wax of an unlit candle one night!); Dave is considering finally installing a new gear both with cable linkages sourced from a Japanese 4×4 in the Dreamcatcher but first has to figure out how to easily get the engine and gear box in an out of the van on his drive. Ah the joys if LT ownership!

This get togethers’ awards were for longest travelled, best van as voted to by us all, and then best van as voted for by 2 guest judges – Rupert’s buddies, local mechanic Pete Ash & event organiser Neil VW Whitenoise Haughey. Dave & Andrea’s Dreamcatcher won both best in show and furthest travelled (although they passed this on to Vic who had also travelled a fair distance from Rugby), and Russell & Yvonne’s bus won the guest judges trophy – it really is a classic (sounding & looking) example.

We look forward to our next meet up to see what whacky and wonderful schemes have become reality in the next field of LTs! 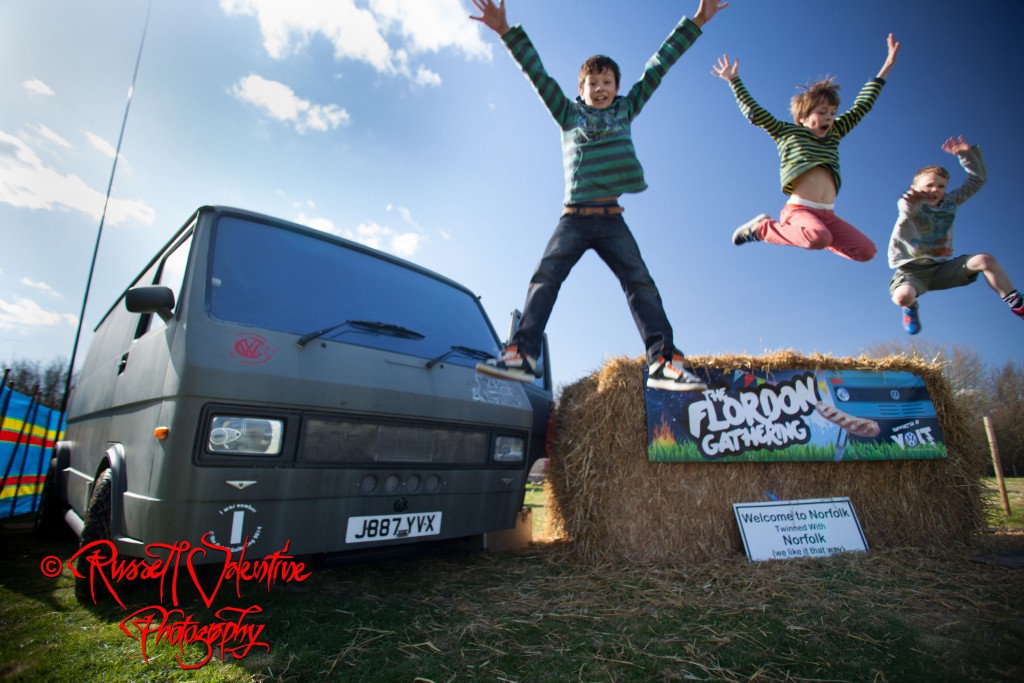 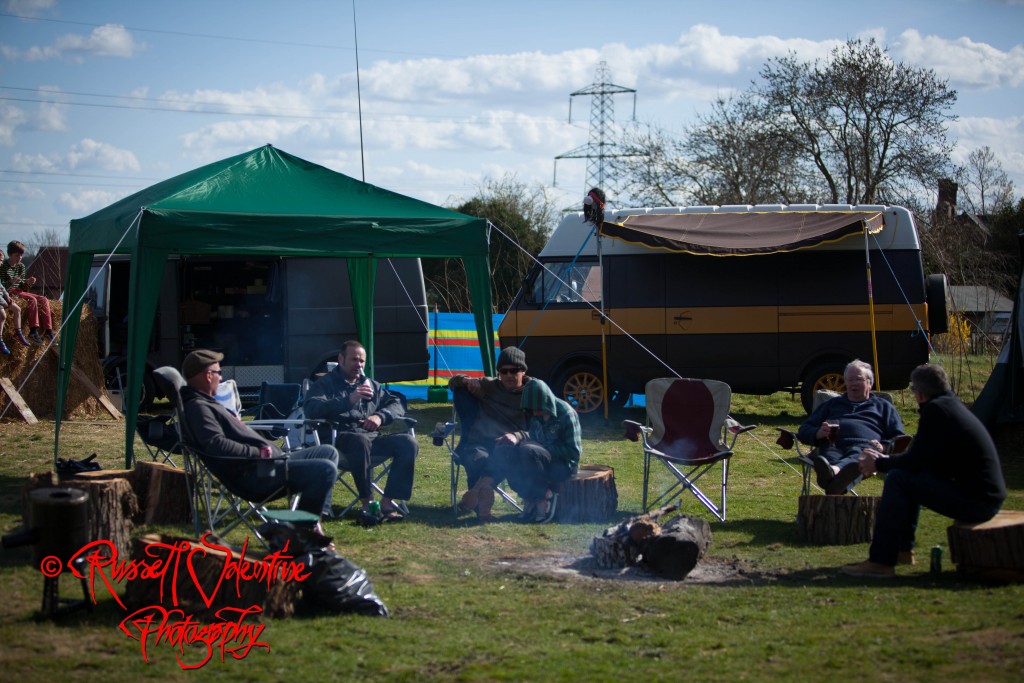 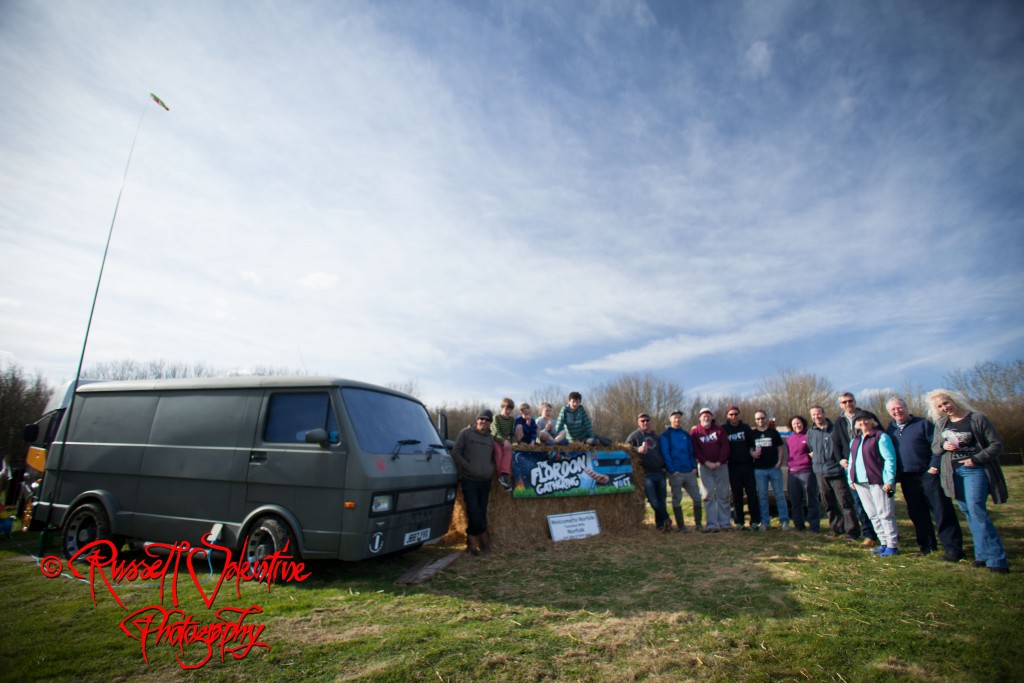 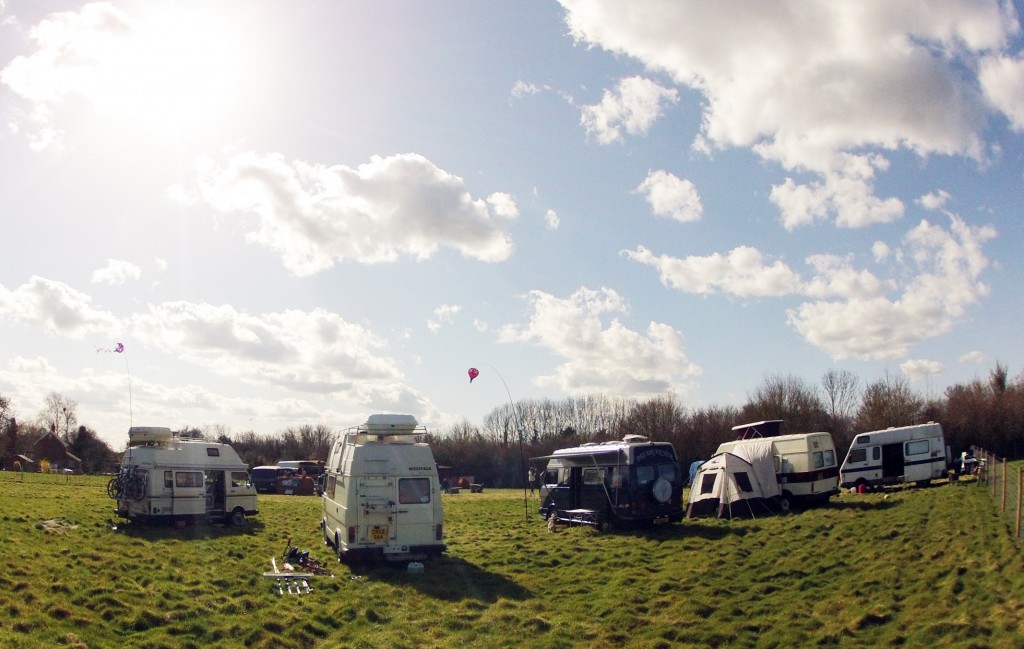 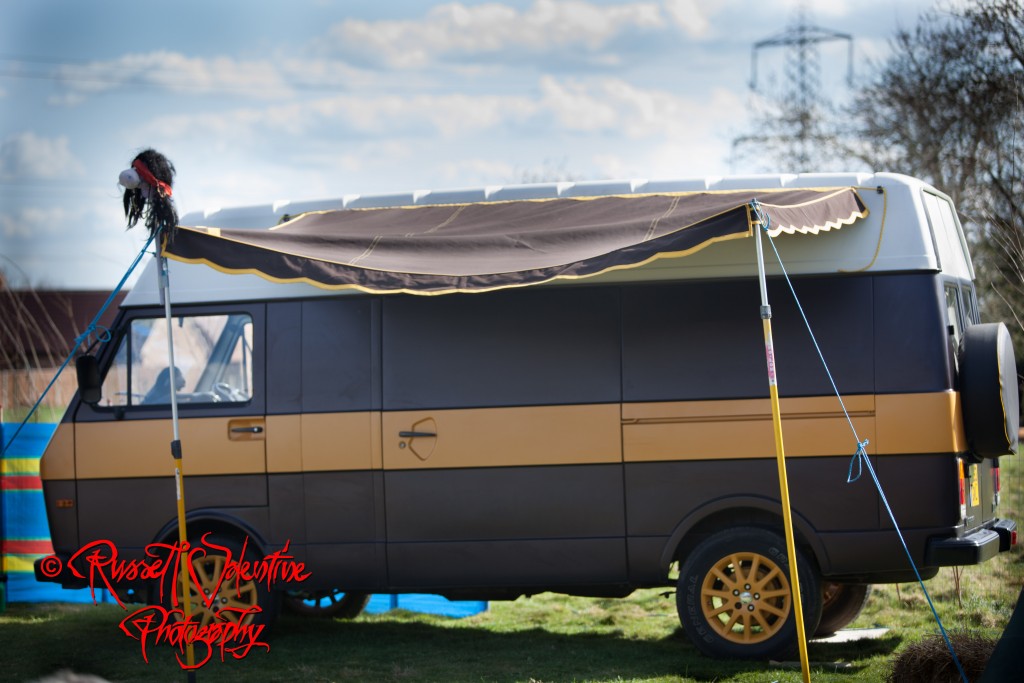 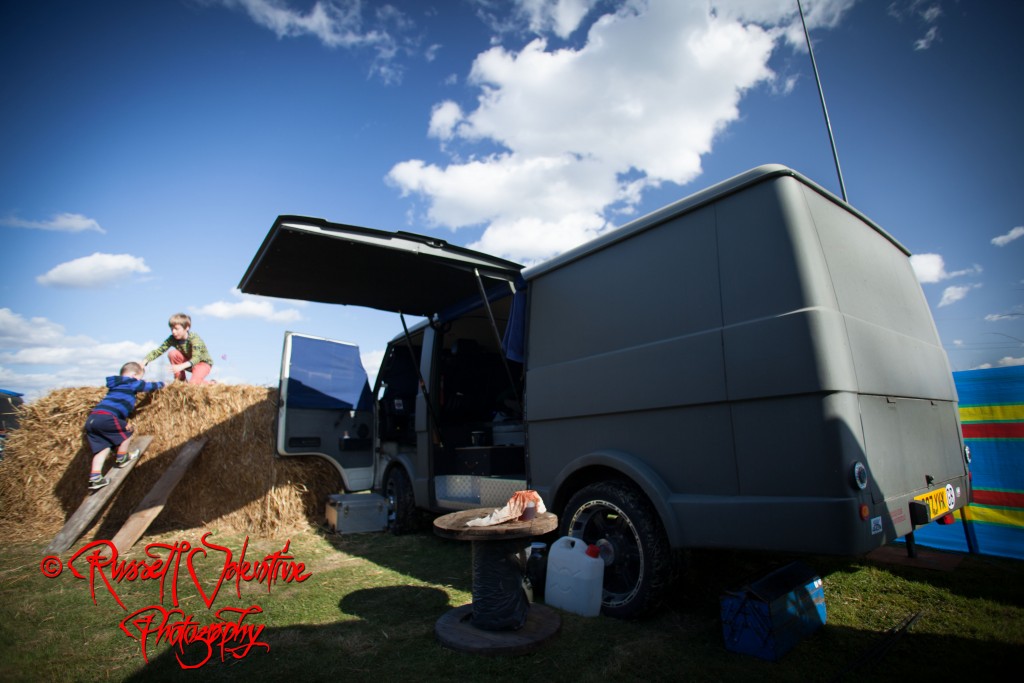 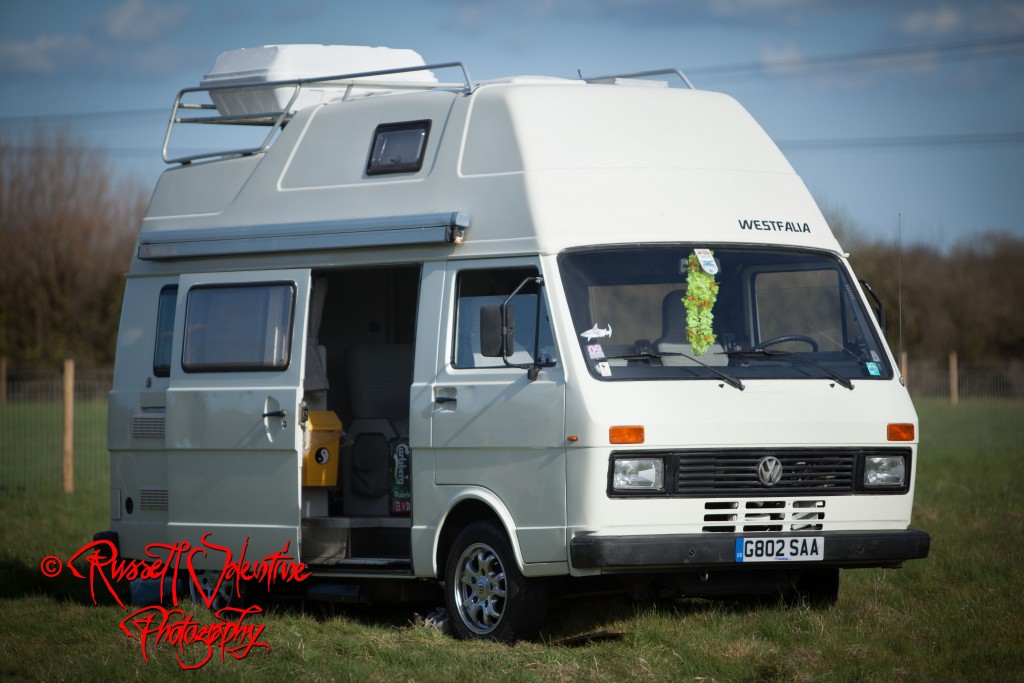 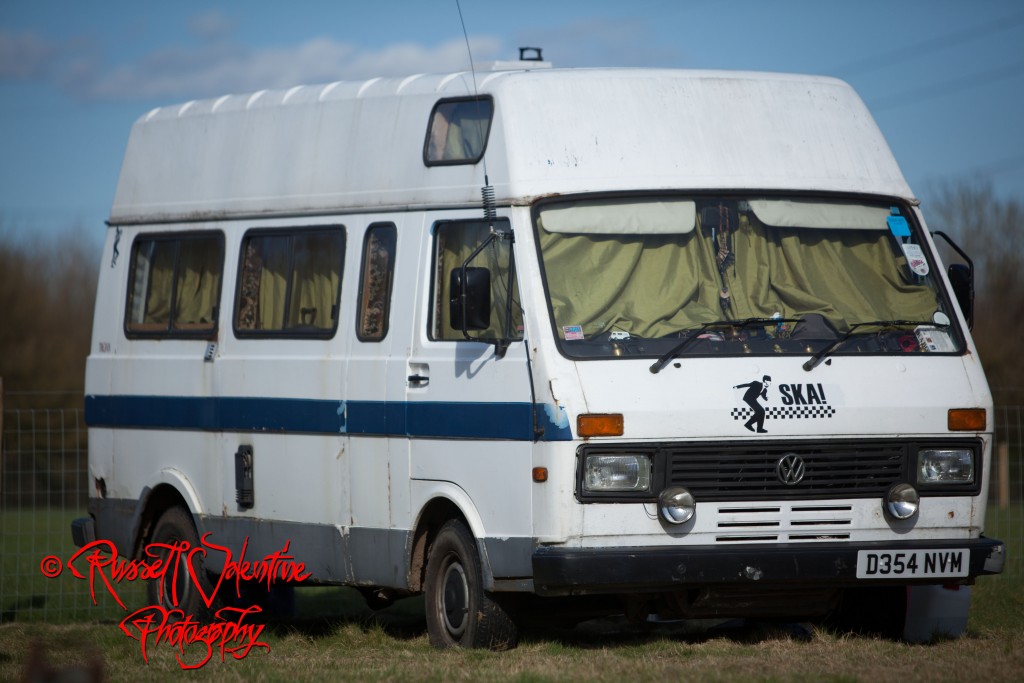 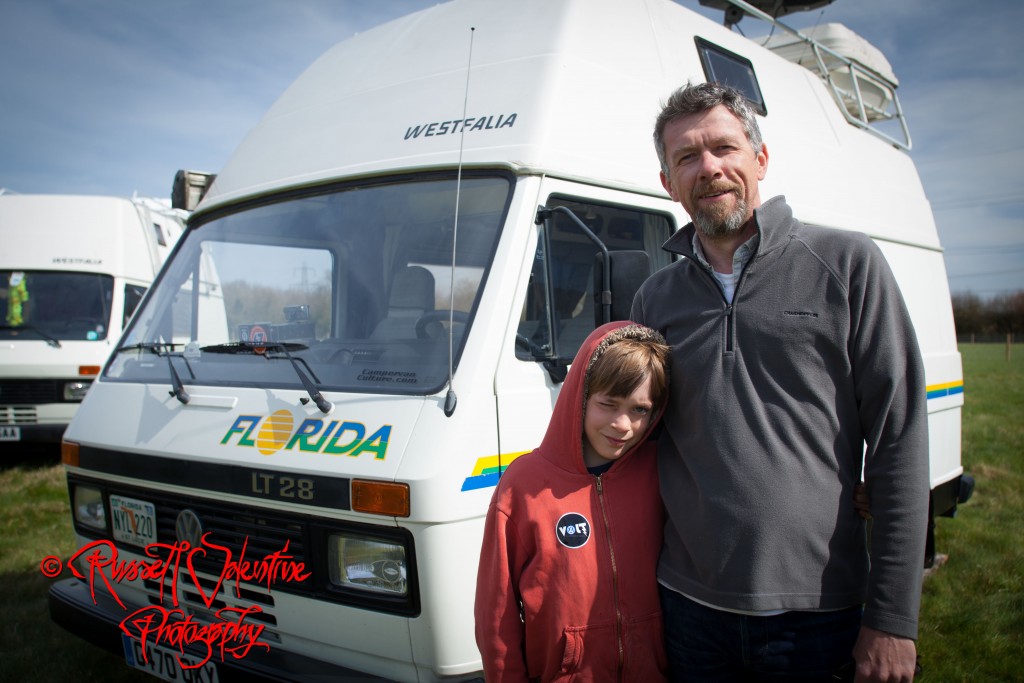 Tim & Archie with their ’89 Florida 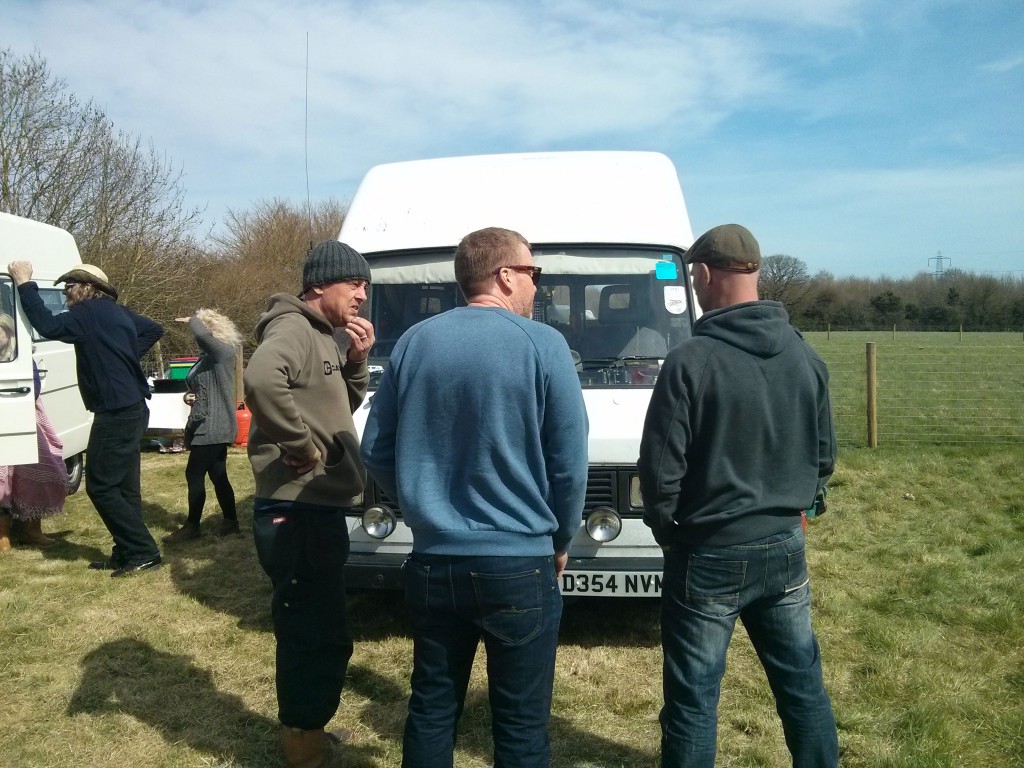 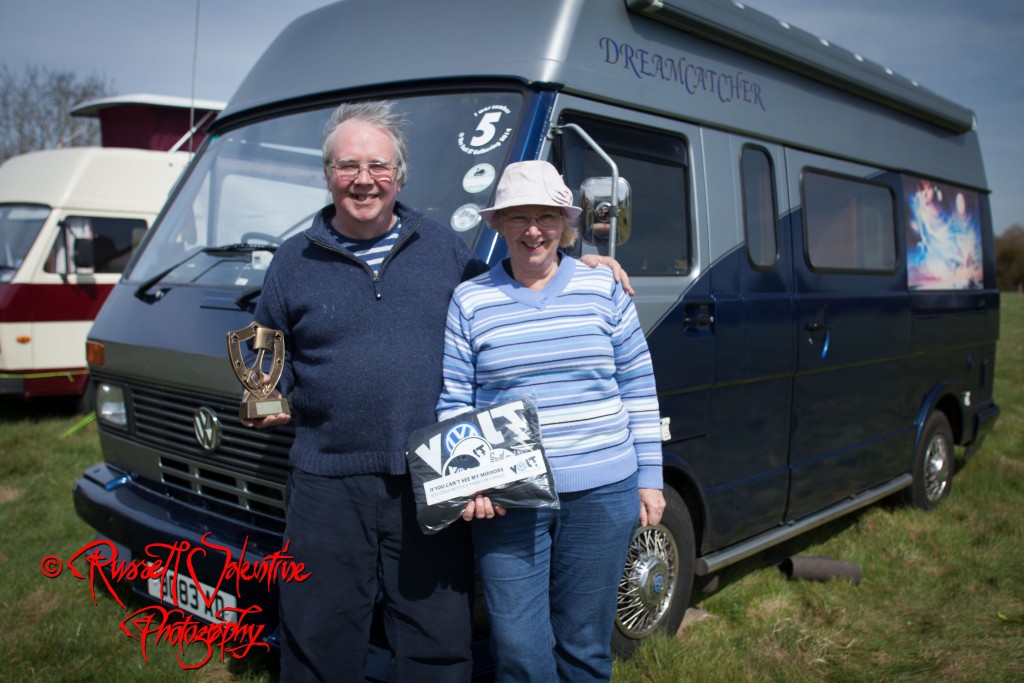 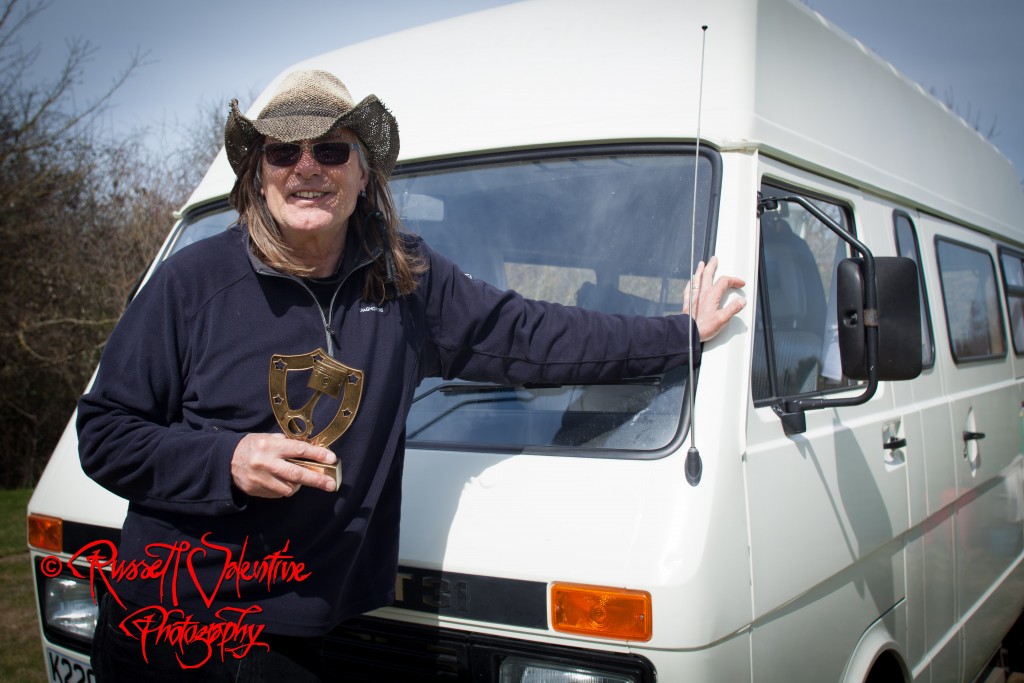 Photographer Russell wins the judges prize for Best In Show (how did he take that photo?!) 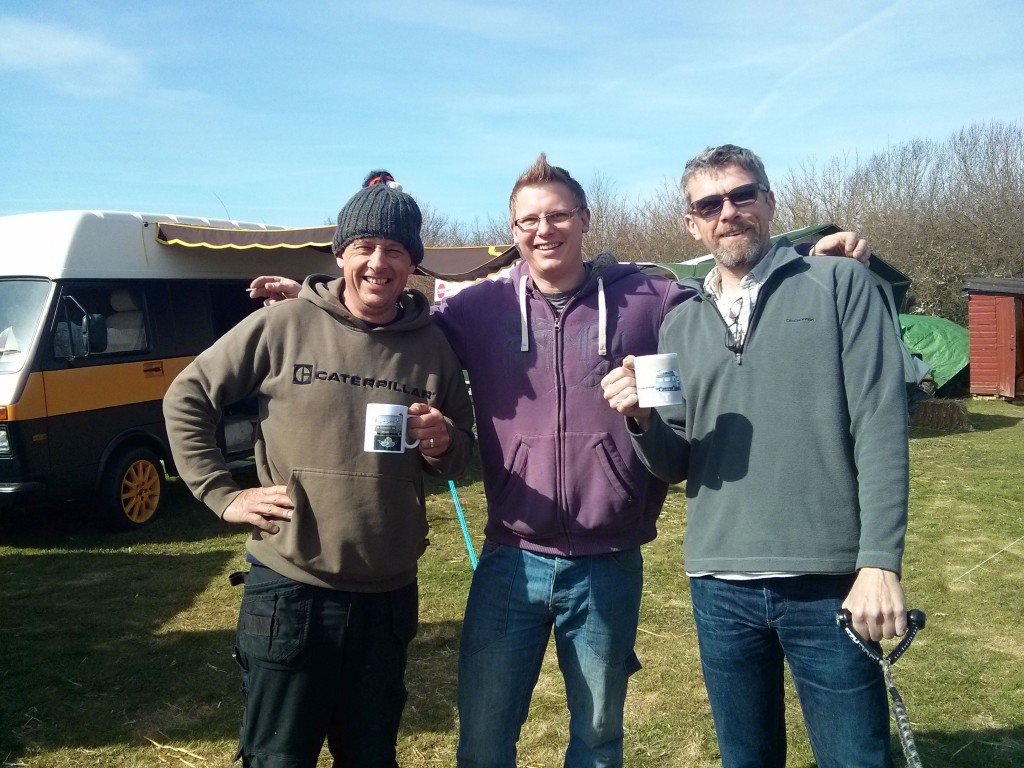 Simon Evans and a couple of personalised mugs!! 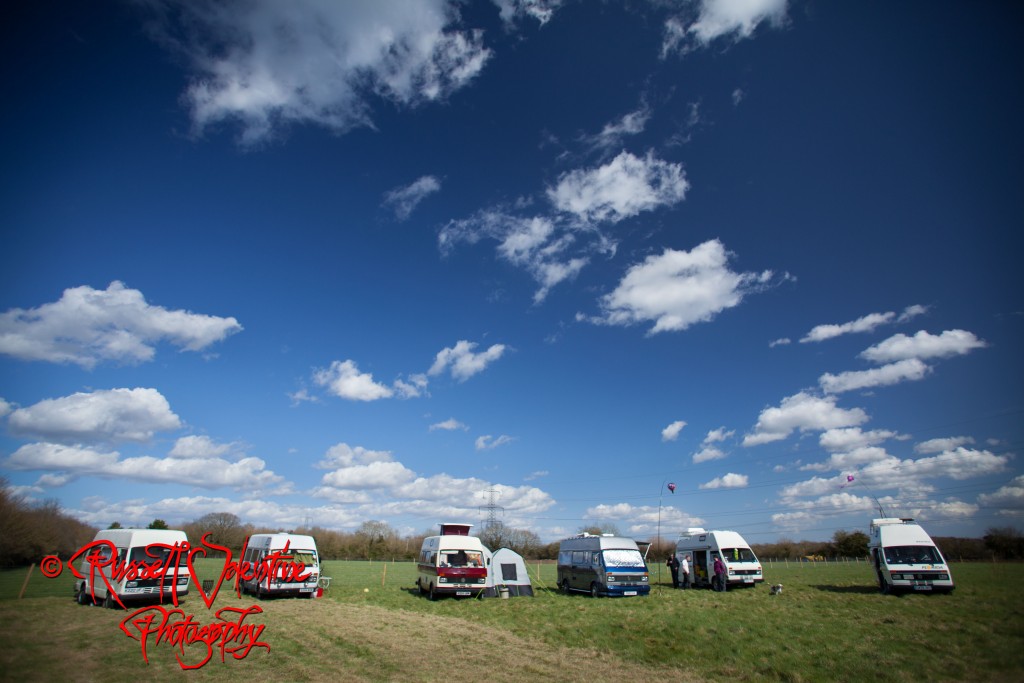 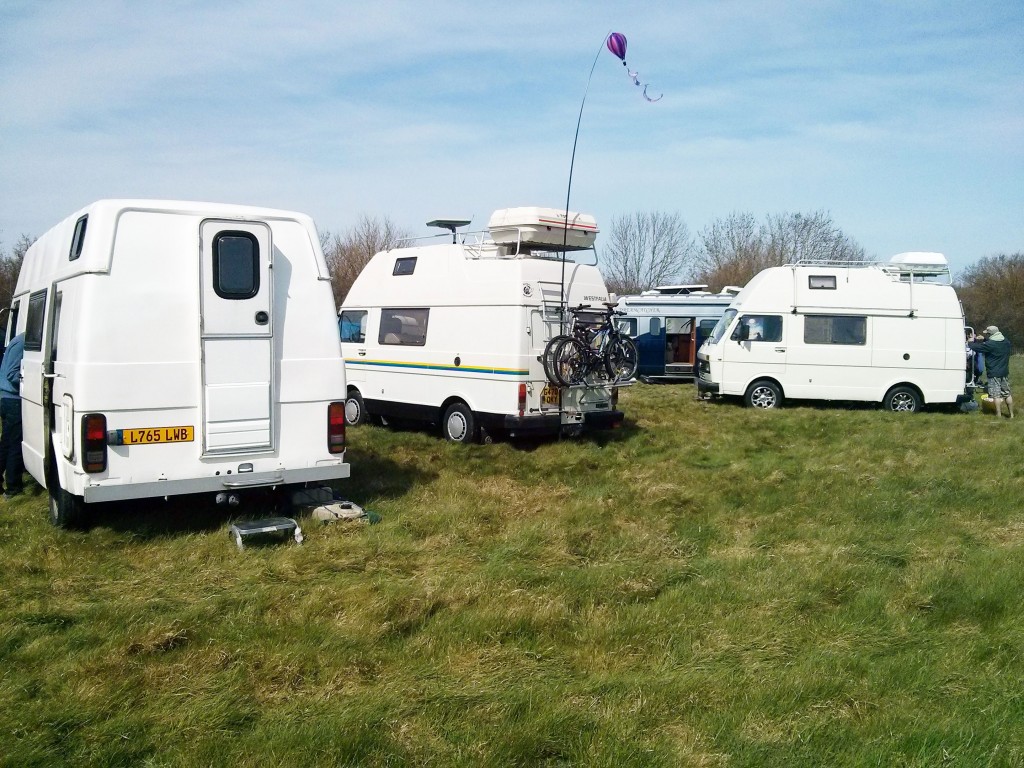 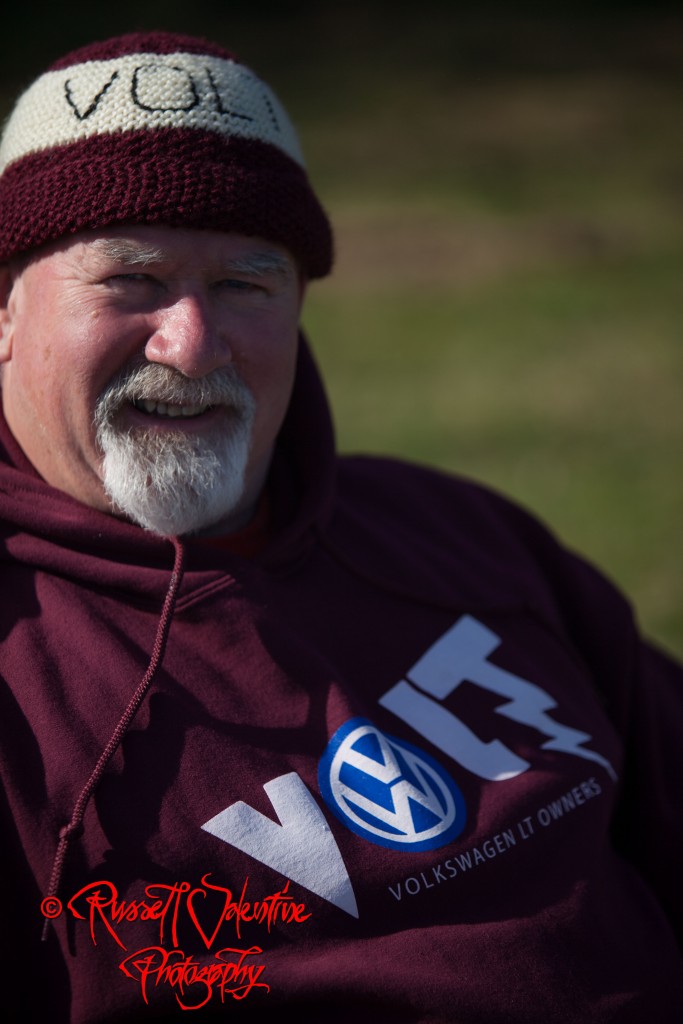 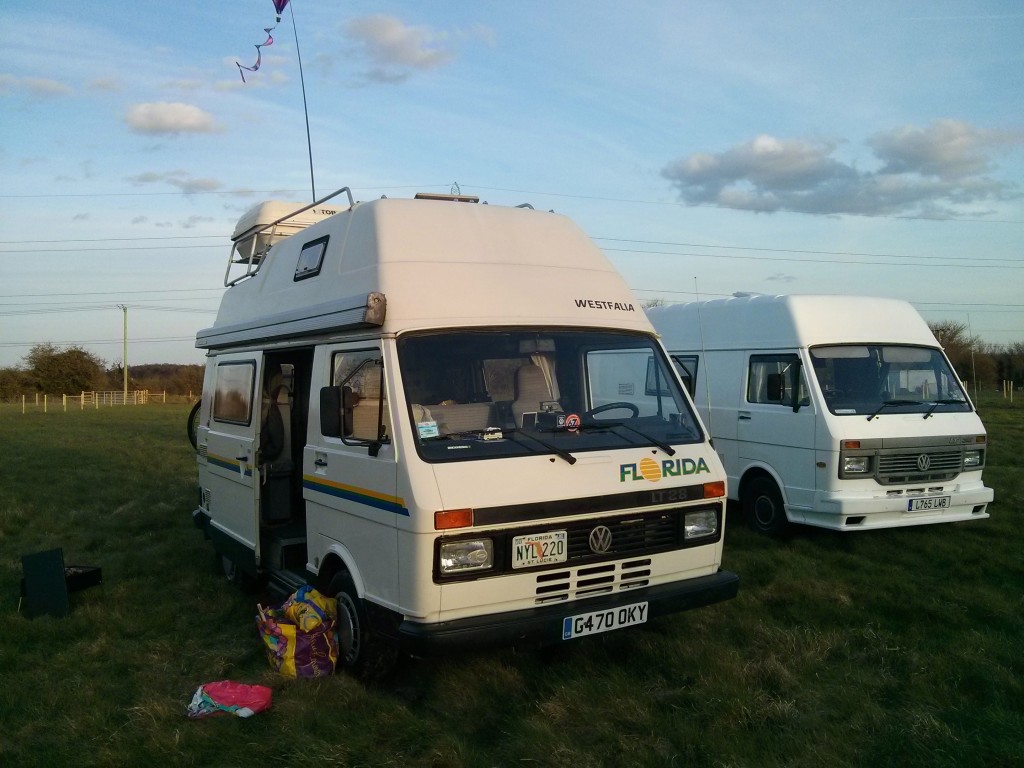 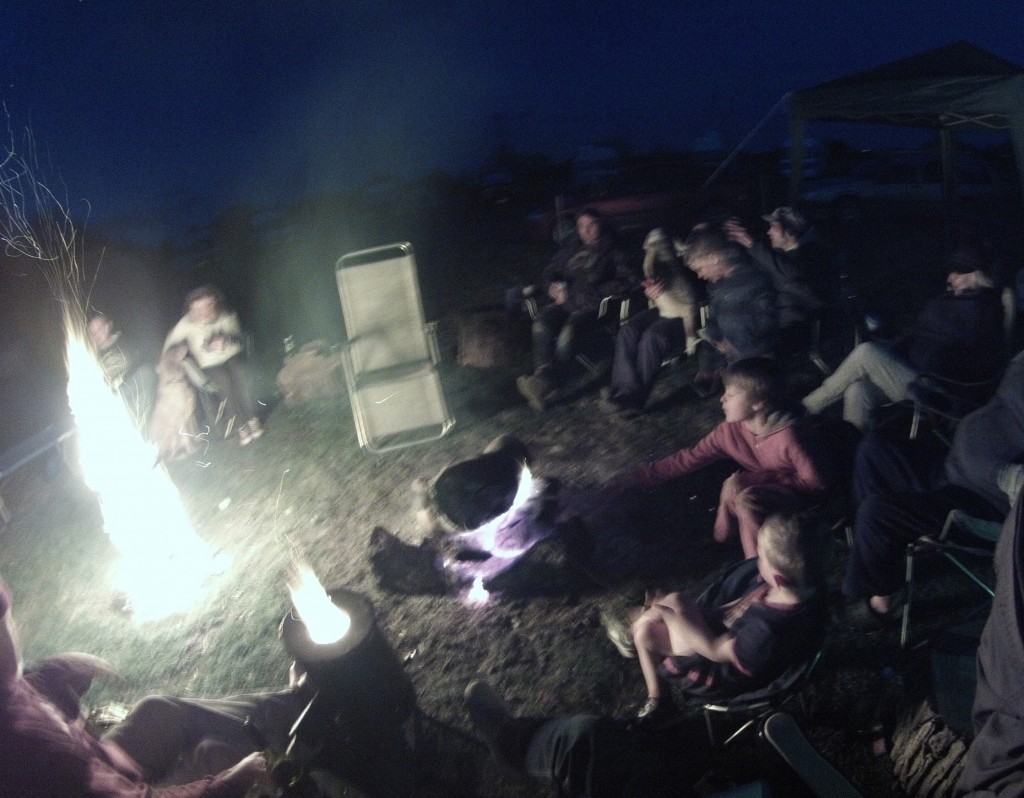